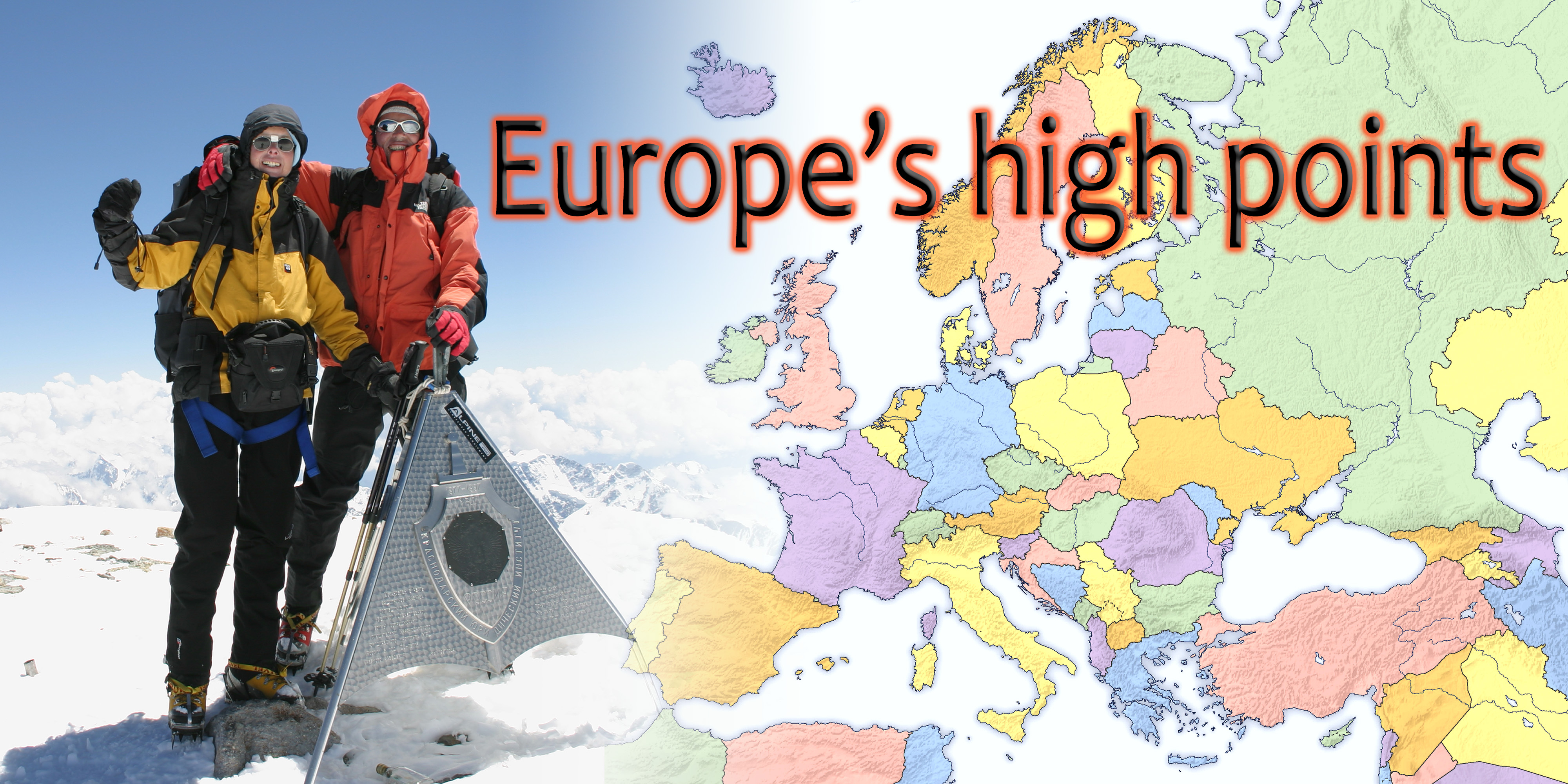 Whenever we were in foreign countries on other continents, we looked for the opportunity to climb a country's highest mountain. Below are the high points one of us or both managed to achieve. 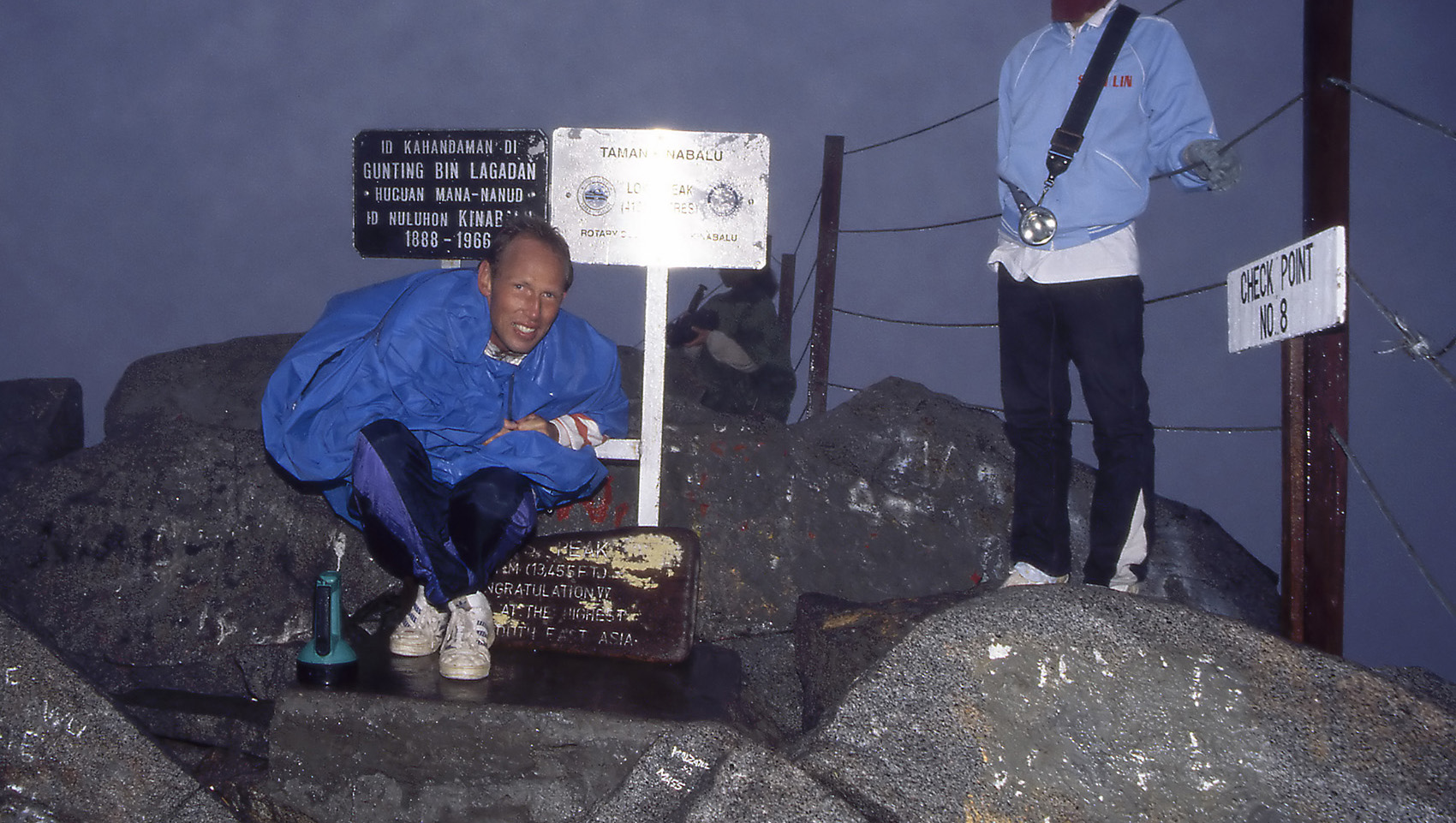 Till the 1990s the Kinabalu was considered to be the highest mountain in South-East Asia. But since Myanmar opened up, there was a mountain in the Himalays of Myanmar that appeared to be higher: Hkakaborazi (5881 m). It was only climbed for the first time in 1996.

Well, Kinabalu is the tallest of Malaysia. It's an easy climb starting on 1900 m. At 3300 m there are the Laban Rata huts, where we got a few hours sleep. Somewhere at 2 am we left the hut and arrived at the summit around 6 am. The way to the top is over granite rock slabs, where they installed fixed ropes. On the top it was freezing cold! 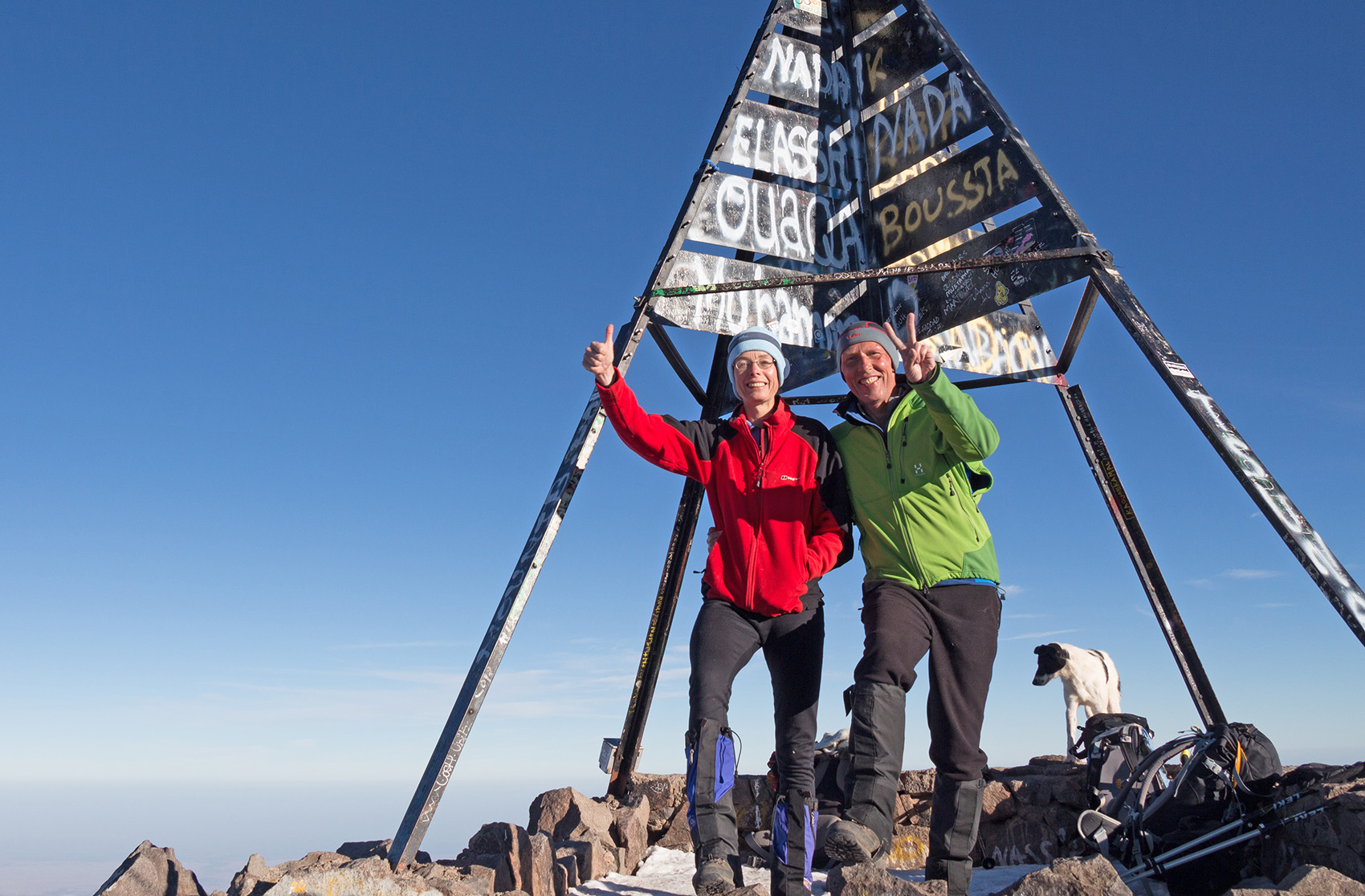 I climbed Toubkal twice. First time was in 1997, in 2 days from Imlil and via the Toubkal refuge.

Second time was better. That was in 2015. We took a longer approach. We started a 4-day trekking from Tassa Ouirgane via the Tizi Aguelzim (3500 m) to the Toubkal hut first. It was nice to approach the hut from another side and the views on Toubkal were stunning.

Next day at 5 in the morning we left the hut for the summit. We were the first. It was al snow till the summit. In the hut there was this dog that accompanied us all the way to the top. At 8 we arrived.

Back down we took another route, via an airplane that crashed a long time ago. Eventually we joined the main trail to Imlil. And said goodbye to the dog. 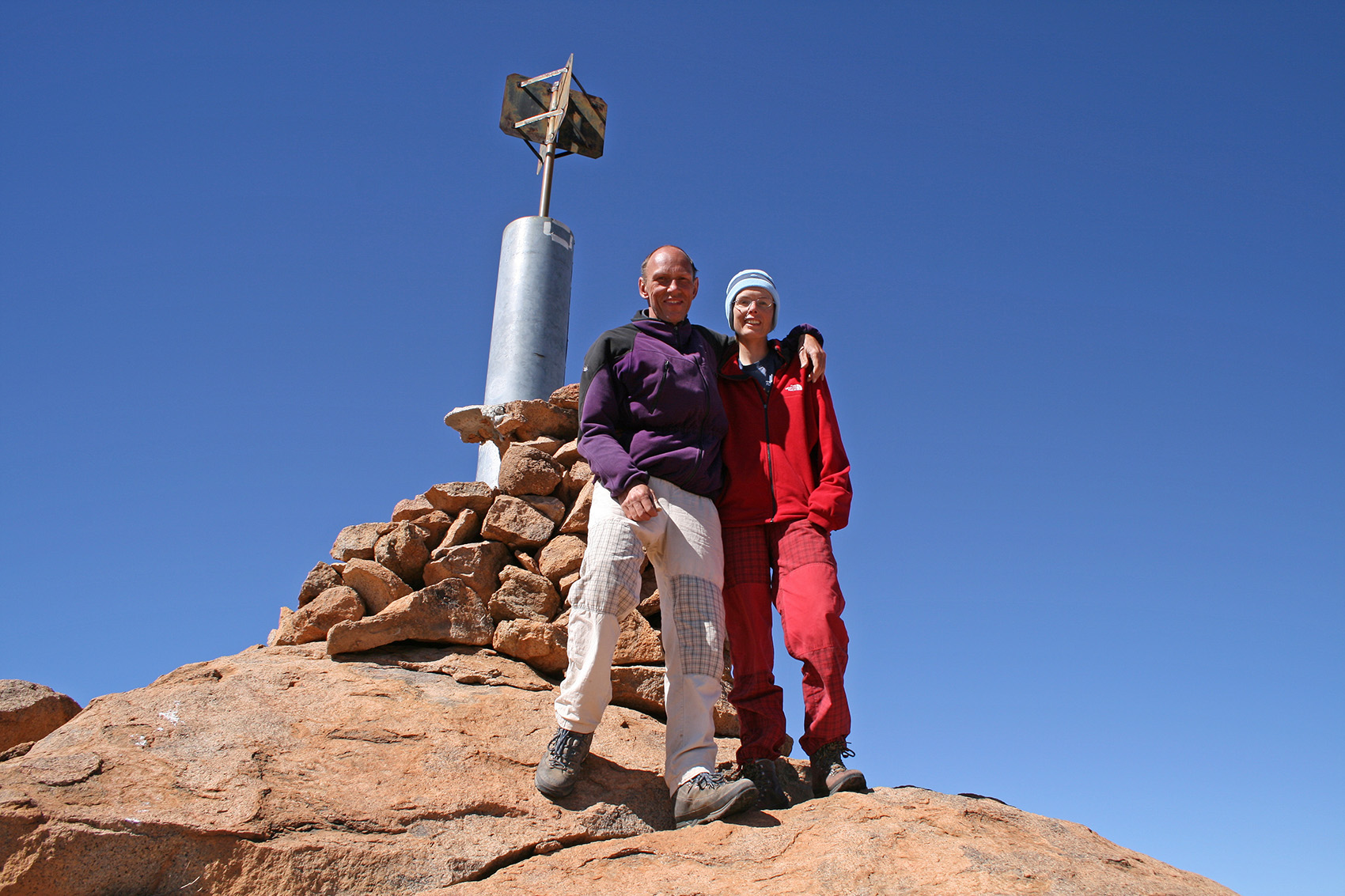 There are no hiking trails on Brandberg, only routes, but they are not marked. So you need a guide. And a second reason for a guide is that he knows where water can be found, because you need 1 or 2 nights of camping. We used the services of Daureb Mountain Guides, and took one of the longest routes up.

We parked our vehicle somewhere on the SW side of the mountain at 700 m. From there we walked and scrambled to our open-air camping spot at 1900 m. After a good night sleep (a mouse was nibbling on my finger though) we left camp at 8 and summited at 12.30 pm. 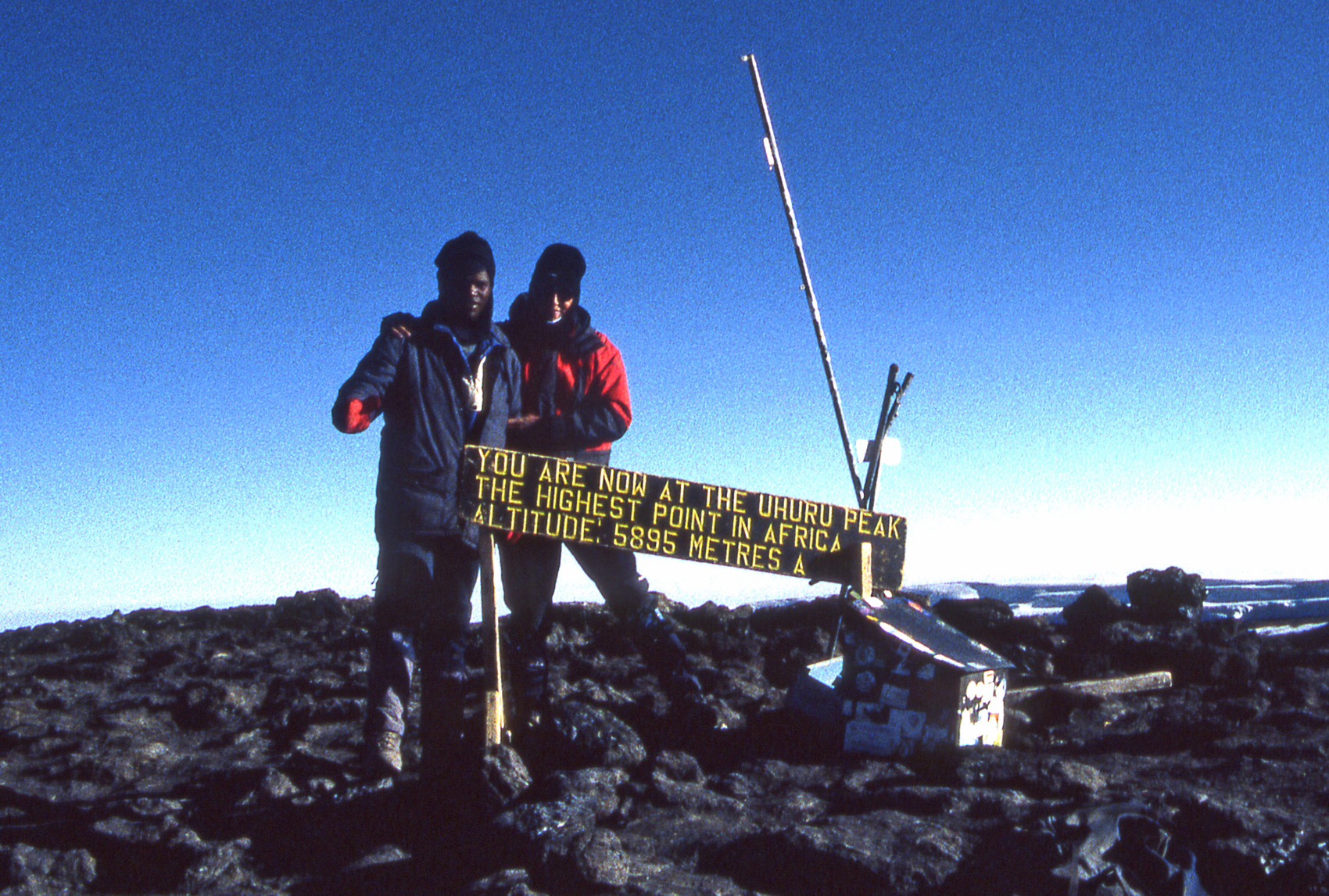 Some parties take a rest / acclimatization day at 3800 in the Horombo Huts, I did not. So 3 days after leaving Park HQ at 1800 with a guide, cook and porter, I arrived at Kibo Hut at 4800 m, feeling fine.

After an early supper I tried to catch some sleep until it was 'breakfast' time around midnight. At 1 am the summit push started. This last part to the top is basically at a 45 degrees angle, it is a volcano. I found it very strenuous to walk and above 5000 m I was also developing some altitude sickness, fortunately only headaches. But some other people who were also going up were in a lot worse condition. I've seen people vomitting from altitude sickness. It is said that only 20% make it to the summit. Also my guide was having problems, he walked like a drunk. I've given him my walking poles.

At 5.30 we reached the rim of the crater, Gilman's Point. Most people called it a day there. The summit lies exactly on the other side of the crater and is another 2 hours walking. I forced myself to continue (the guide was not very motivated anymore) and at 8 am I reached the highest point of Africa, and my guide too.